A Level Orientation Evening for Students and Parents

This event was designed to provide information on the soon-to-be-launched A Level programme from academic year 2021 and onwards so that students and their parents could understand well this very worthwhile option available for the final two years of study at Brummana High School.

Principal David Gray started proceedings by welcoming everyone (65+ attendees). He said that A Levels are the culmination of the British system. BHS students have a choice between the IB Diploma Programme and A Levels in the International Programme. Students need to look at the booklets carefully to make their choice. Students should consider the options available, speak with their parents and not rush into any decision. He said that if a student would like to do the IB, which is a more all-encompassing, holistic programme, then they have got to be strong at everything. With A Levels you have the chance pick and choose, narrowing down your options and focusing more on specific subjects. Mr Gray stated that when he was young he wouldn’t have been able to cope with the IB. He was very capable in English, French and History but less so in Maths and Sciences for example. So, as it turned out, he chose those three subjects for his A Levels in Scotland. He reminded students that A Levels are difficult and they have two years to study them. A Levels are studied in about 140 countries around the world. They will, like the IB, allow students to qualify for the sophomore year of university. In the UK 70% of students do A Levels whereas 30% do the IBDP. The IB has grown in popularity in recent years, with the holistic nature of the programme.

Many different items were covered by Mr Georges Rizkallah and Mr Gray on course selection. 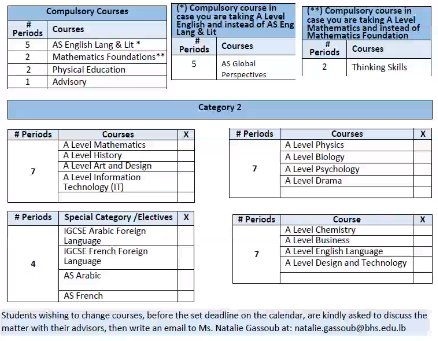 Mr Gray also said when applying to universities abroad, universities typically give a conditional offer of a place, specifying the grades required to gain that spot at that particular university. For example, University College London (UCL) may say the student requires two As and one B. If the student earns this, then their place is guaranteed. An unconditional offer is one with no restrictions.

It was also mentioned about entering a university in Lebanon at the sophomore year, that students must take 8 IGCSEs and pass at Grade C or above (on top of the 3 A Levels at Grade D or above). This is a Lebanese Education Ministry requirement.

Mr Georges then introduced all the Heads of Department at the Upper School and then led a valuable Q&A session with parents and students asking very pertinent questions on the A Level programme.

The Special Category area and for example the difference between AS Arabic or IGCSE Arabic Foreign Language, as well as for the AS French and IGCSE French Foreign Language, was asked about. It was said to the audience that the AS qualification is harder and of a higher value than IGCSE. Mr Georges said that IGCSE Arabic was the minimum required by the Government. IGCSE French examinations can be taken after one year or two years, depending on the student’s progress and ability.

Another question was received about whether students can take a course at A Level if they haven’t already taken that at IGCSE Level. The answer in general was no due to the large challenge presented at A Level, however, in special circumstances there could be an opportunity for this, particularly if course selection and categories may prevent students from selecting A Level subjects which they have previously studied at IGCSE.

The traditional “drop and add” window for course selection at the start of each academic year will run for approximately two weeks after school starts.

Mr Gray asked students reciprocally: “What have you done at IGCSE; what have you really enjoyed; what are you good at…” and for them then to decide on what they should choose.

Mr Georges said he is very confident in the programme and in all the teachers due to give these A Level subject options.

The evening session ended with everyone happy and full of A Level knowledge allowing those students to go away and consider their options from grades 11 & 12 at BHS.