> The visit provided some relief and optimism to the community as the country continues to experience the economic, social and health crises as well as the aftermath of the Beirut port explosion on August 4th

It was an esteemed honour and privilege to welcome H.E. Mr. Bader Bin Mohammed Al Mantheri, Ambassador for the Sultanate of Oman to Lebanon, on the Brummana High School (BHS) campus on Thursday, September 24th.  The representative of His Majesty Sultan Haitham bin Tariq Al Said joined Principal David Gray, Bursar Raymond Feghali and Marketing Manager Richard Bampfylde for three hours to tour facilities and dine on a Lebanese feast in the school’s canteen.  His Majesty Sultan Haitham had been a boarding student at BHS from 1969 to 1973.  Ambassador Al Mantheri’s long visit allowed for a full tour of the property, including buildings dating back to the 1870s when the school first began its provision of excellent education as well as the boarding facilities where the Sultan was a resident for over three years. 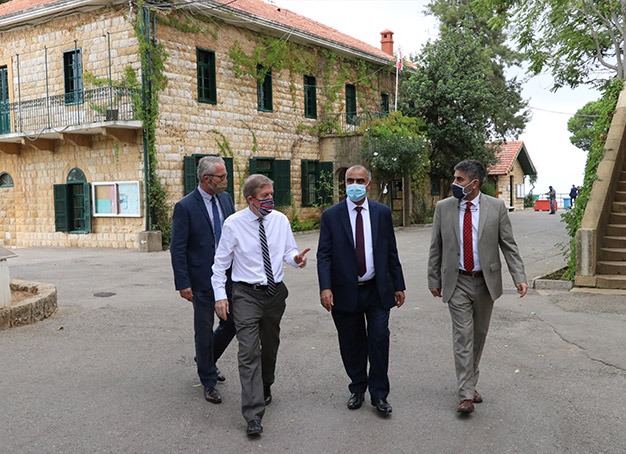 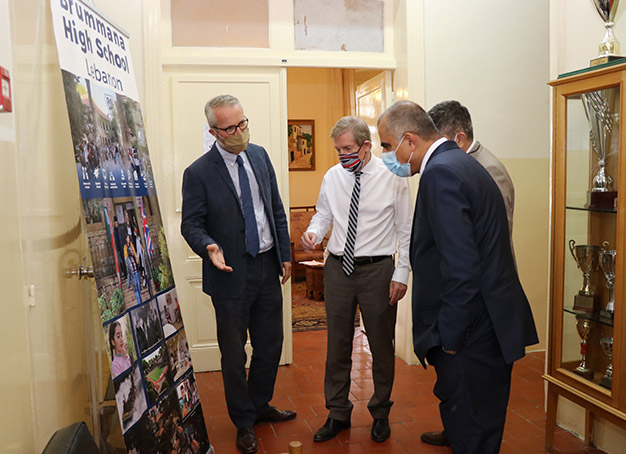 His Excellency entered campus at the scheduled time of 12:30pm, first meeting with the Principal, Bursar and Marketing Manager, who then provided a tour of the Upper School, starting at the Science Building and Meeting House, then moving to the Main Teaching Block and Library Building, and finishing at the University & Careers Centre and Administration Building.  Ambassador Al Mantheri seemed very impressed with the teaching and other facilities, including being greeted with a very special welcome at the Library entrance, where a small exhibition on Oman kindly prepared by Upper School Librarian Carmen Gerji was displayed. 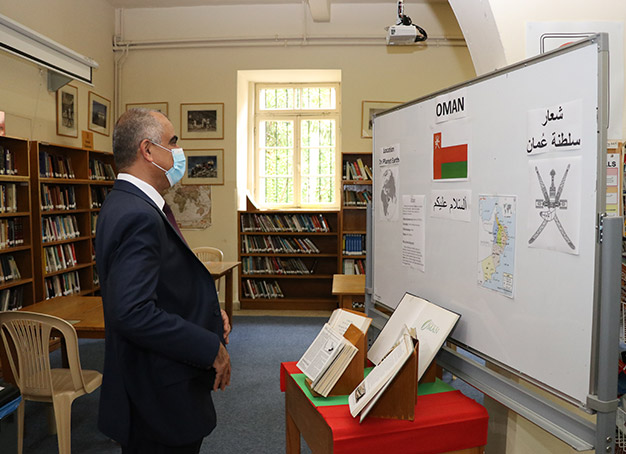 It was at this stage that the Ambassador presented a first gift for the school, and a truly remarkable one it was too.  A full history of the Sultanate of Oman in an 11-book box set was passed to His Excellency from a member of his team allowing him to present the collection to the Principal for the Thomas Little Memorial Library.  The set of hardback books depicts the complete history of the Sultanate and is written in beautiful Arabic text, almost calligraphy-esque, and will be a resource for students and other visitors to the library to learn from for years, decades and centuries to come. 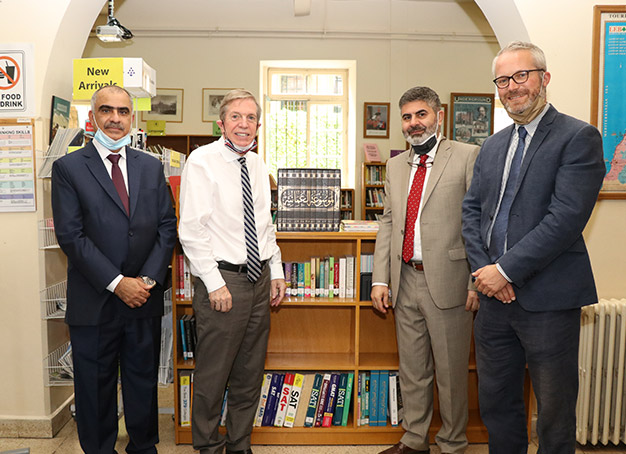 Ambassador Al Mantheri was then welcomed into the school’s canteen, a venue His Majesty Sultan Haitham would remember well as the location where he took his lunches during his time at BHS.  The party were treated to an absolute Lebanese feast and a special thanks to Abdou Trad and his staff for such an experience.  A traditional mezze kicked off lunch proceedings, including almost too many items to name!  This course was followed by a very tasty lamb and rice dish and for dessert an array of fruits as well as tea and coffee were served. 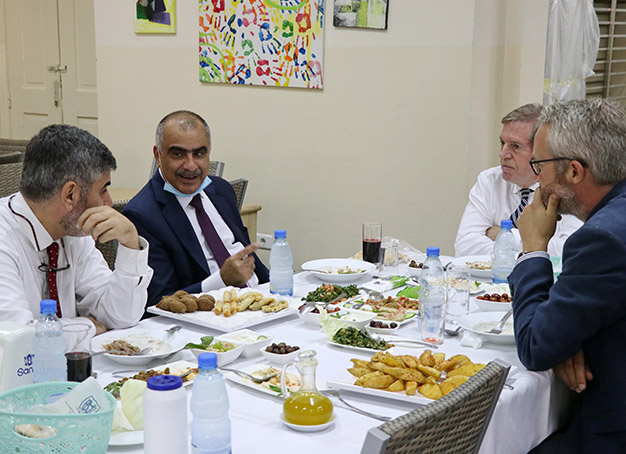 The Ambassador at this stage then wished to offer a second gift and, if the first was truly remarkable, the second was almost unbelievable!  Producing a bag with the ensign of the Sultanate of Oman, Ambassador Al Mantheri asked BHS staff to try to guess what was inside.  Little did they know that His Excellency would produce a beautiful gift box which inside held an emerald-encrusted khanjer, a traditional dagger from that area of the Middle East region in particular.  To receive such a gift is truly something to behold and the school aims to keep it safely locked away but in a location that visitors can have the opportunity to see. 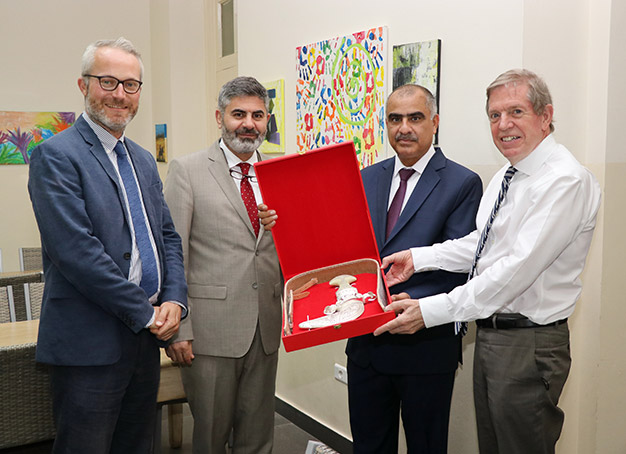 Following lunch, the Ambassador was pleased to continue his tour of the rest of the campus.  The party moved from the canteen down towards the Lower School, passing the greenhouse on the way, which included a very nice peek into the facility as well as being greeted by the four or five large chickens currently resident!  Then it was to the main steps that lead down passed Dobbing Hall and the swimming pool, gazing back at the Ain Al Salem spring whilst walking down.  The party then skirted the Rizkallah Building and headed down for the boarding facilities and Edinburgh Boarding House in particular, passing the soon-to-be-finished BHS Sports Arena.  After a tour of the boarding rooms and recreational areas by the Boarding Parents, Rabih and Lamiss Aouad, the Ambassador enjoyed gazing out from the back balcony of the facility, looking into all the old pine trees situated on the BHS campus and beyond.  Following this it was over for the last stop of the tour across from Edinburgh House which comprises Fleissy and Little Houses (extra boarding facilities) as well as the school’s amphitheatre which hosts the annual drama performances in the early summer each year. 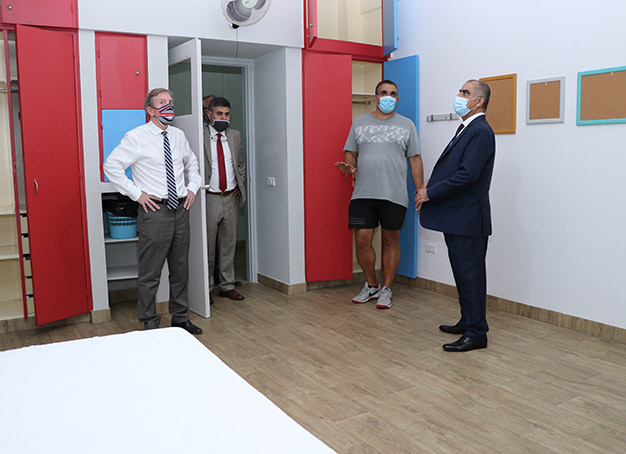 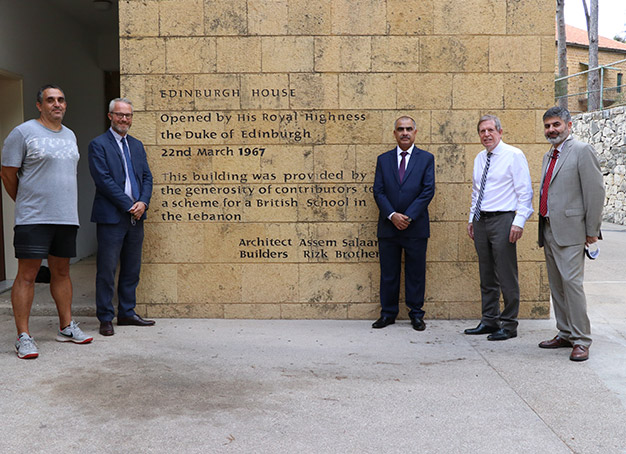 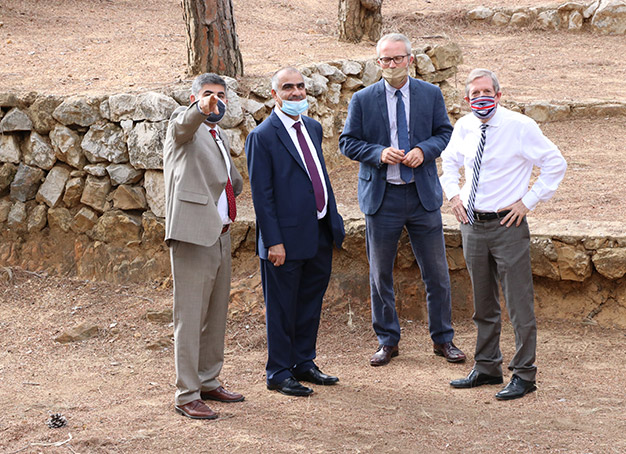 The Ambassador left campus at 3:30pm and headed for Beirut.  Given the ongoing multiple crises in the country, from economic to social to health, on top of the aftermath and resulting trauma and further uncertainty from the Beirut port explosion on August 4th, this uplifting visit from His Excellency afforded some relief and optimism to be shared in these particularly troubling and challenging of times.  The impact of his visit will remain with the school for a long, long time to come.  Thank you Ambassador and thank you Your Majesty Haitham bin Tariq Al Said.