BHS in The International Educator

A School Community One Year On: Beirut Port Explosion 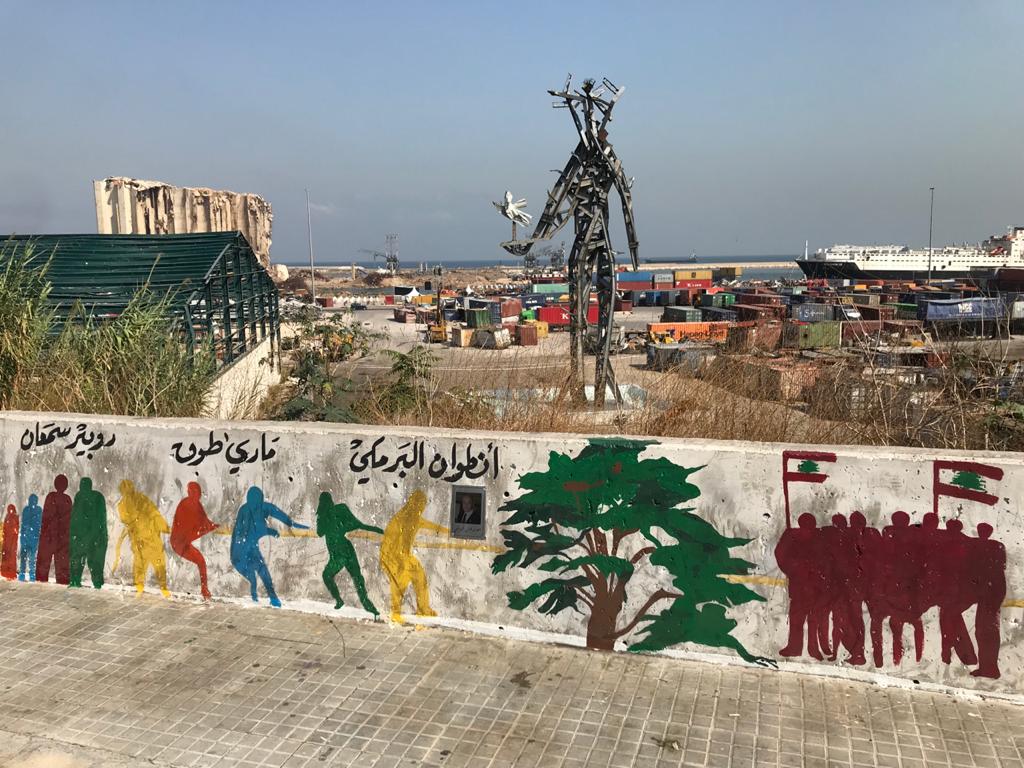 Beirut Port, Lebanon: Graffiti along the wall depicts the Lebanese people re-erecting their cedar tree and providing optimism through solidarity; the sculpture, The Gesture, by Lebanese artist Nadim marks the one-year anniversary of the explosions and was developed by a group of architects and NGOs; left is the grain silo that was destroyed and had a major impact on bread availability in the city, its presence sheltered one side of the city from the explosion; in the background a half sunken ship remaining from the tragedy.
———————————————————————————
One year in Review

12 months since devastating explosion in Beirut, one of the largest in world history
> Marches and vigils held in port area for 200+ victims and many others affected
> School students and staff had rushed to provide relief last year
> Principal marks anniversary with UK webinar calling for donations
> Quakers and other supporters around the world pledge to support
>Critical time now for education as Lebanon rebuilds following blast and multiple other crises

It has been a very emotional time in Lebanon.

Today marked one year on from the devastating August 4th Beirut port explosion. Declared a day of mourning, a visit to the site brought back strong emotions from last year’s tragedy. Marches and vigils were held for the 200+ victims and the many others injured, made homeless, or those who lost their livelihoods, with tens of thousands attending.

Marking the date at Brummana High School, Principal David Gray shared a very sincere message with the community on the tragedy, the situation at school and in the country. The evening saw Principal Gray presenting to the Quaker British Yearly Meeting, where he was joined by several Trustees.

The situation in Lebanon is desperate. Last month the World Bank reported the crippling financial crisis could be in the top three most severe crises since the mid-nineteenth. It has left over 50% unemployed and 60% below the poverty line. Even for those in employment, the local currency has devalued to such an extent that salaries are worth less than 10% against the US dollar and rampant inflation makes many goods and services simply out of reach. Just putting food on the table is a substantial challenge for so many, including families in the school community.

Mr Gray’s message included videos from 2021 graduates highlighting the fantastic work and efforts of students this year (such as their 5th Model United Nations and relief efforts last summer on the streets of Beirut) as well as the impact of financial aid on students and their families.

The school remains ever grateful for the tremendous support received since the explosion. The Beirut Fund enabled families affected to rest assured of continuing education in Brummana for their children. Yet the community requires much more now. Any amount, large or small, can be put to excellent use during these extremely challenging times. Please consider giving at https://bhs.edu.lb/giving/donation-appeals/.

With the support of friends in the UK, the US, and worldwide, no student will be left behind and every single boy and girl can benefit from the high quality, holistic, values-based education. This is an education so desperately needed now to create the leaders of tomorrow, and for them to galvanise society and rejuvenate the country from this period of catastrophe.
———————————————————————————
Richard Bampfylde is the Marketing Manager at Brummana High School in Lebanon