Antonius Joseph Manasseh (Tanius) was born into a Greek Orthodox family in 1866. His father Joseph was a silk merchant in Beirut. Tanius was one of three brothers who found themselves at the centre of the progressive education and health services at the Quaker Mission in Brummana, which later became Brummana High School. 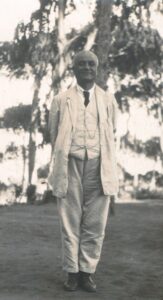 Tanius was among the earliest pupils at the school, then known as the Boys Training Home. His elder brother Beshara, aged 24, had just completed his medical training in Beirut, when he was asked by the school’s founder, Theophilus Waldmeier, to be it’s first Principle. Later, Dr. Beshara returned to his medical career and married Rosa Waldemeier, daughter of Theophilus.

Tanius was quite a shy boy, but an excellent student and when he left school he trained as a pharmacist at the Syrian Protestant College, now known as the American University of Beirut. He qualified at 18 and returned to Brummana to work with Dr Beshara, whose focus had turned from education to medical work. They were based in an old silk factory that had been converted into a small hospital, where the school swimming pool is now. Tanius kept the hospital books, helped with operations and wrote prescriptions. He quickly became a valued member of the team and the Mission decided to fund his further training.

At 21, Tanius went to study in the north of England for a more advanced pharmacy qualification, at what is now Leeds University. In many ways this move decided his future path in life. He stayed with a Quaker couple in Leeds, whose quiet confidence and way of life was hugely influencial; he became a ‘convinced Quaker’ and remained so all his life. Tanius had a contagious cheerfulness like ‘bottled sunshine’ and that, together with his aptitude and Quaker values, made him a remarkable and successful student. Despite being a foreigner; he fitted in extremely well in England and (modestly) carried off most of the honours, before returning to work in the Brummana dispensary.

The Quaker influence on Beshara, Tanius and their younger brother Spiridon Manasseh was very profound, but it wasn’t popular among members of their wider family, who showed their dissaproval by ‘cutting them off’. In later years, once the brothers all had well established careers and reputations that could be seen as a source of pride, this rift was repaired.

As the medical work at Brummana expanded, Dr. Beshara became somewhat over burdened. Tanius’ younger brother Spriridon joined the team as a pharmacist and Tanius set his sights on medical training, in order to help his elder brother

more effectively. At 28 he returned to England to study medicine, first back to Leeds again, then on to the London Hospital and Moorfields Eye Hospital.  In June 1897 he earned his Membership of the Royal College of Surgeons (MRCS) and the diploma of Licentiate of the Royal College of Physicians (LRCP). To practice medicine in the Ottoman Empire, Tanius also needed to sit his medical exams in French, in Constantinople (Istanbul), which he did in two weeks, on the way home to Syria from Britian.

Tanius not only returned home with the title Dr, he had also found his future wife, Henrietta Benington. Hetty, as she was known, was from an old Quaker family in Britain. The two met because they were training in the same hospital, she as a nurse. Hetty was told to go and stoke the hospital boilers one day, but when she got to the boiler room she realised she had no idea how to do that and got terribly upset. Tanius was passing by at the time and heard Hetty sobbing. He came to the rescue and romance blossomed. Hetty eventually went to join Tanius in Brummana and became a citizen of the Ottoman Empire. They married in 1899, with a civil ceremony at the British consulate in Beirut and a Quaker marriage the following day at the Friends Meeting House in Brummana.

Tanius and Hetty lived in Brummana and had their 2 children, George and Dorothy, alongside a demanding social and professional life. Tanius had a strong sense of curiosity and a love for what is now termed life-long learning, including a genuine interest in other people. His medical practice covered a wide geographical area and he’d ride many tiring miles on horseback to see his patients, as well as always being on call at home. His work was often innovative too and some was even published in The Lancet (medical journal). Hetty and he hosted international guests and Tanius himself loved to travel, not in order to take a holiday, but for the interest and delight of learning more and making new friends.

By 1914, at the start of World War I, Tanius’ son George was safely settled at boarding school in England and Hetty and daughter Dorothy went to join him. Their British heritage made it unsafe for them to stay in Brummana once the Ottoman Empire had sided with Germany and by 1915 all English colleagues had also left. Tanius was put to work by the Turks. He continued caring for individuals, living and working at the Brummana Mission until the hospital and school were taken over for military puposes. Tanius was then sent to Damascus for a few months before being posted to Baalbek, where he stayed, almost until the end of the war.

1914-18 was another defining period for Tanius: a friend described ‘a feeling that his war service was perhaps one of his best contributions, where he blossomed in such uncongenial soil’. He was unafraid, generous, positive, and saving lives, threatened not by fighting in Lebanon, but by famine and diseases, like malaria, typhus and typhoid. It was a perfect storm of natural and man-made events that caused the death of between a third and a half of the Lebanese population.

Tanius was an avid letter writer and despite being away from home during the war, he was still able to visit friends and relatives in Brummana occasionally. His cheery disposition brought what was described as ‘a breath of life when it was most needed’. Friends appreciated the fact that he had enough strength to support a burden that would utterly crush most people, and yet he still seemed to have some left to share and help others.

In 1917 Dr. Beshara Manasseh contracted Typhus and Dr. Tanius went to help his brother recover, but unfortunately, in doing so, he too caught the disease and was very seriously ill. His recovery was slow because of the lack of food and a heavy burden of work; the strain of these war years was to impact his health for the rest of his life.

Towards the end of the war, despite poor health, Tanius helped a friend who’d been unjustly imprisoned by the Turks. He courageously spoke truth to power and got his friend released, but as a result, he was sent from the relative safety of Baalbek into the thick of battle at the front in Palestine, in what is now the West Bank. Fortunately, he and his friends found shelter in half ruined buildings until they were able to surrender to the British and French and become prisoners of war. Tanius then tended to the needs of sick Turkish prisoners and made friends with his captors.

After the war, Tanius knew that his medical skills were scarce and decided that despite not having seen his family for years, he would help with relief work. He wasn’t reunited with his wife and children until he met them in England in the summer of 1919.

The following years saw Lebanon prosper; its infrastructure improved and Brummana became a popular summer resort. Tanius settled back into family life, and  medical work, which expanded alongside the school. The converted old silk factory  had never been very suitable as a hospital and Tanius had dreamt of replacing it for years. Now, the time seemed right and he set about raising funds and executing his plans for a modern purpose built 36 bed hospital; sadly, he died in 1929, shortly

before the new building was opened. His hospital is now known as Rizkallah and houses the BHS infant section.

All his experiences made Tanius into an internationalist. He was much more focused on individuals and their interests than he was in what nationality they were. It helped that he could speak 5 languages: english, arabic, german, french and turkish. In his obituary published in the British Medical Journal, he was described as ‘a bridge between individuals and peoples who misunderstand one another’.

Brummana became known for its spirit of friendliness and an atmosphere which makes the meeting of nationalities easy. It was the work of people like Tanius that laid these sound social foundations upon which the positive and enduring culture at BHS is built. Tanius himself however was said to be largely unconscious of his radiance and like all true peacemakers, he never saw much to make peace about, simply because no one quarrelled in his presence.

Sarah Barrett is the great granddaughter of  Dr. Tanius Manasseh & convener of Friends of BHS in the UK & Ireland.