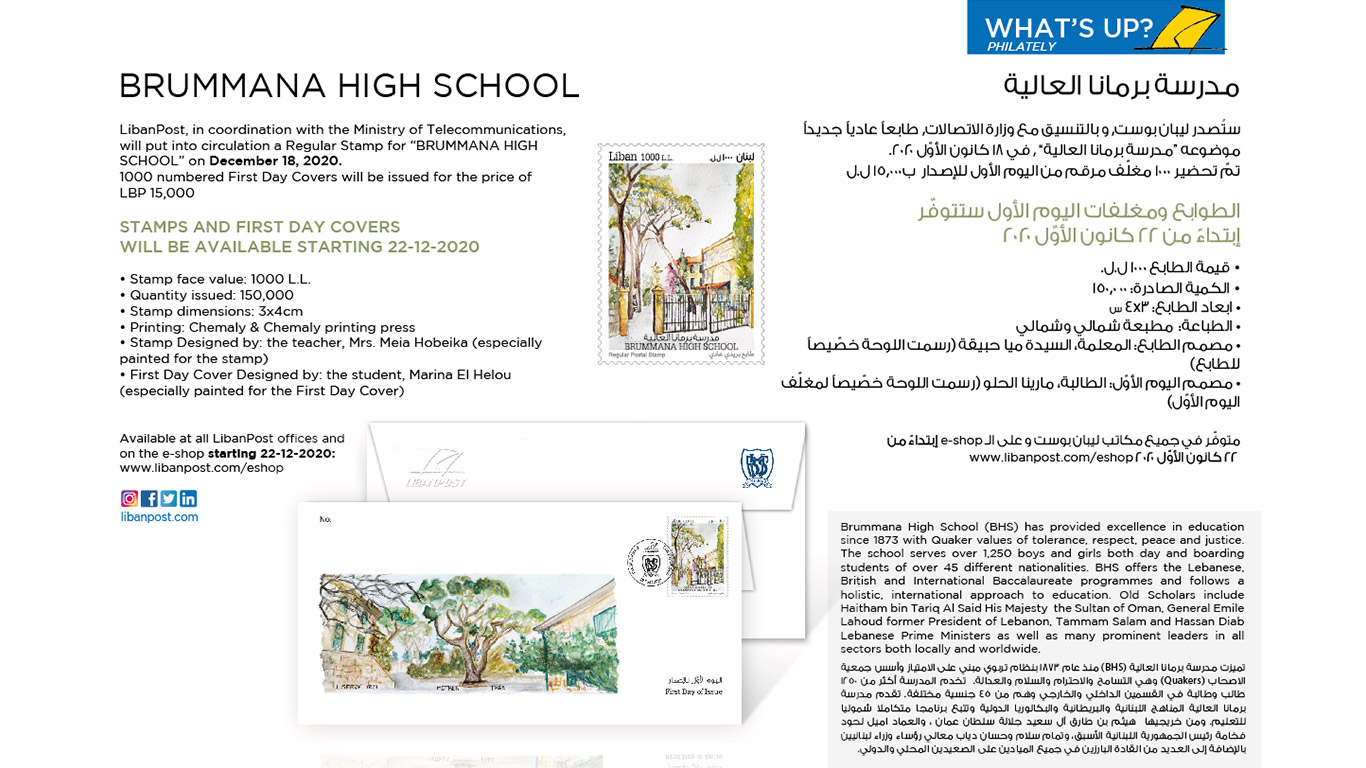 Brummana High School (BHS) is delighted to publicise the unveiling ceremony of the new Regular Stamp in Lebanon held on Monday, December 21st.  Various dignitaries were in attendance, joining for the ceremony in the Meeting House on BHS campus, including His Excellency Mr Talal Hawat, the Minister of Telecommunications, representing His Excellency Prime Minister Dr Hassan Diab who was unable to attend in person.  Other dignitaries included Mr Adel Zeinoun, Deputy Mayor of Roumieh Municipality, Mr Ronnie Richa, Senior Marketing Manager of LibanPost, and Mr Naji Chakhtoura, Vice President of the school’s Old Scholars Association.  BHS was represented by Principal David Gray and other senior staff as well as the Stamp and First Day Cover designers, Head of Arts and Crafts Mrs Meia Hobeika Bechara and Grade 10 student Marina El Helou.  Substantial measures were taken to ensure a Covid-safe environment, including the wearing of masks, social distancing and ventilation of air continuously.  150,000 Stamps and 1,000 First Day Covers have been issued in Lebanon and are available at all LibanPost offices and their e-shop, as well as the BHS Bookshop.

After the playing of the national anthem and school song, a message from H.E. Dr Diab was shared by H.E. Mr Hawat.  The speeches in both Arabic and English were incredibly moving, and included some of the Prime Minister’s memories from his years at BHS as well as recognising the school for the first-class educational institution it is, in Lebanon, the region and right around the world.  Warm and sincere introductory greetings were then offered by Mr Gray and BHS Chairman Mr Hani Aboul Jabine, delivered by Bursar Mr Raymond Feghali as BHS’ Chairman was unable to attend himself.  Mr Aboul Jabine’s speech, after saying how honoured the school was to have the Minister of Telecommunications on campus and representing Prime Minister Diab, with Dr Diab himself a BHS Old Scholar, included:

“It is with great pride and joy as we are nearing our 150 anniversary to say that we are still a beacon, lighting these dark and confused times.  As always, we pride ourselves in being educators and not just teachers where we adhere to our Quaker principles… So many of our students have become political and financial leaders in the Middle East and are highly respected.”

These words were then followed by very kind words from Mr Richa of LibanPost.  It was then the turn of Mrs Bechara and Miss El Helou to share their experiences in the creation of the Stamp and First Day Cover designs, and this is what Mrs Bechara had to say as to why her choice was for the campus Main Gate in the Stamp image:

“Well, it is the first thing we all see when we enter BHS.  It is the student’s first step towards a bright future in education, experiences and friendships.  It is also a gateway to new opportunities.  The gate, the trees and the buildings behind them are also familiar to all BHS community members; students, staff, parents and Old Scholars in Lebanon and around the world, so it’s an image that will certainly travel far, carrying memories of great moments that remind us where it all started!”

The Stamp was then officially ‘unveiled’ with Stamps and First Day Covers handed out to all attendees.   It was a truly exciting opportunity for all attendees to see such a beautifully designed material, marking the school for its pivotal role in Lebanon’s past and present educational sector.

Following the unveiling, gifts were presented to H.E. Mr Hawat and to Mr Richa.  Principal Gray then received a gift from LibanPost, with the Stamp and First Day Cover showcased in a plaque stand.  Photos and light refreshments followed, after which guests stayed to engage with the Minister of Telecommunications in particular, who was very generous and warm, before exiting the large Quaker Meeting House on the Brummana campus.

BHS has a rich history in the country, having provided excellence in education since 1873, and with Quaker values of tolerance, peace, respect and justice remaining an integral part of the education and community.  The school serves over 1,250 boys and girls, attending either as day students or boarders, with 45 different nationalities represented on campus.  BHS offers the Lebanese, British and International Baccalaureate programmes and follows a holistic, international approach to education.   Old Scholars include the Sultan of Oman His Majesty Haitham bin Tariq Al Said, former President of Lebanon General Émile Lahoud, former Prime Minister Tammam Salam as well as many prominent leaders in all sectors both locally and worldwide.  The BHS motto ‘I Serve’ is inherent in all members of the community, with service a very evident character trait.  Historic buildings from the 1870s are complemented with modern facilities, and substantial new investments are being made including a new BHS Sports Arena.  The beautiful, secure, 16-acre campus, 750 metres above sea level offers students and the whole-school community the space and environment to flourish.

Chairman of the Board of Governors word for the Stamp launching event:

Friends,welcome to Broumana High School. We are honoured to have the Minister of Telecommunications who is representing PM Diab who is an old scholar of BHS, on the occasion of Liban Post launching a postal stamp of Brumannna High School.
It is with great pride and joy as we are nearing our 150 anniversary to say that we are still a beacon of lighting these dark and confused times. As always, we pride ourselves in being educators and not just teachers where we adhere to our Quaker principles of honesty, transparency and peaceful coexistence regardless of religion, politics or affluence.
So many of our students have become political and financial leaders in the Middle East and are highly respected. I believe the Middle East will only rise if BHS’s principles will be adhered to.
On behalf of Paul High, the chairman of Quiet and myself, the chairman of the board, I would like to extend our gratitude to the indefatigable efforts of the Principal David Gray and the Bursar Raymond Feghali for all their hard work that went beyond the call of duty day and night including weekends with the assistance of their loyal staff. On this occasion I would like to thank the art department in producing this beautiful stamp.