Blog Article: COVID-19 in Slums – The Shelters That Are Being Slept On

For you to be able to read this article, you obviously have access to technology. You also obviously go back to a house, with food and water, electricity, and most importantly, a roof over your head. That is the life that 828 million people around the world are not able to have, as stated by the World Health Organization, and the number is increasing with the fast-changing economies and diverse opportunities of this world.

The main reason behind the formation of slums is simple actually: factors such as hunts for job opportunities, political unrest and turmoil, and hopes of finding a better living are just the tip of the iceberg. But then, a few bumps on the way to the desired goals could lead to poverty, resulting in the formation of these informal settlements. Some of the largest include that of Dharavi, in Mumbai, India, and the ones located in São Paulo, Brazil.

The pandemic manifested its way to Dharavi in the first few days of April, and it has been a constant battle ever since. Regardless of how it had arrived, authorities were quick on their feet and intervention was really speedy, as the isolation of key areas where cases were spotted started to take place. These authorities, backed up by the health ministry, have taken several measures, by converting the National Sports Complex of India, located in Mumbai, into a quarantine facility. In addition to such, more and more testing sites and medical camps are being set up, as well as acquiring local hospitals. Such measures are vital, as experts claim that the pandemic can easily spread in a very rapid manner in these delicate locations. Dharavi, merely reaching one squared mile, where its shacks and huts are home to more than a million people, social distancing and self isolation are very difficult, due to cramming (up to 6 residents in one home on average). On another note, India, being the third largest economy in Asia, will encounter several bumps on its route to ending the pandemic. The International Labor Organization claims that 400 million Indians working as employees in the informal sector will “fall into deeper poverty during the virus-led crisis”, subsequently leading to increase of slums, causing COVID-19’s patient numbers to sky rocket. Hence, experts claim that these multiplying slums will need new strategies from containing the issue, in addition to providing protective gear such as masks, gloves, and sanitizers/sterilizing agents.

Moving on to the informal settlements of São Paulo, Brazil, specifically Paraisópolis, residents decided to take matter into their own hands, as the government would not take action in regards of the prevention of the Coronavirus. The first positive test was found on February 25th in a private hospital located in the region, leading to the country’s health ministry to quickly take action. Officials and experts started spreading awareness regarding the virus and informing people about the basics of social distancing, avoiding people, sanitization, etc. Although, things quickly started firing up as a clash occurred between the health minister and the Brazilian president, Jair Bolsonaro, as he claims that the virus is a “little flu” or even a media “fantasy”. Since the disagreement between both, the health minister has been fired over the “mishandling of the pandemic”. 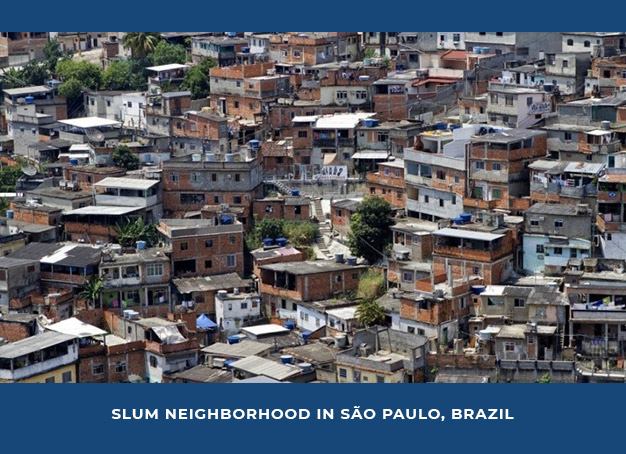 The recommendations that the Brazilian heath ministry has given out are not new—staying at home, social distancing, washing hands—but it’s difficult and very challenging for the inhabitants of Paraisópolis to abide. Just like those of Dharavi, the dwellers in that area live in unimaginable circumstances: tiny brittle homes, lack of resources, and all crammed up.

The residents, surrounded by unbearable conditions and receiving nothing but ignorance and rejection from the government, decided to be in charge and take initiative. Hence, in March, they decided to collaborate with an NGO to receive aid. The organization, G10 Favelas, is a joint project involving community leaders from several slums in Brazil, where their main goal is to offer help to the vulnerable. “We knew that slums would be hit the worst as Brazil started registering the first cases of COVID-19,” says Daniel Cavaretti, national coordinator of G10 Favelas, to The BMJ. “We feared that people would despair and run to hospitals and local health centers, which are not prepared for it.” They were able to hire a private medical service with three ambulances which are fully equipped, as well as a team of doctors, nurses, drivers, and first aid experts. The team takes 24 hour shifts, in order to cater to the endangered citizens.

In the span of just a few months, the COVID-19 wave was able to take the world by storm, and multiply uncontrollably, which was difficult for countries to contain the situation. Governments are finding it difficult to deal with the crisis, hence are being offered aid from international organizations. The UN-Habitat has come up with a response plan for COVID-19, where they help local authorities to identify successful policy, legal measures, and governance approaches to respond to the pandemic in all regions so that everyone everywhere remains protected. In fact, based on each continent, a specific action plan has been perfectly tailored to match the circumstances. 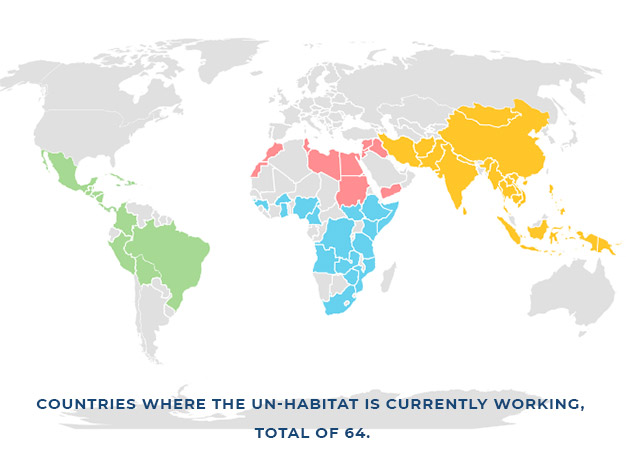 For example, in the Arab States, the UN-Habitat is working in Egypt and using technology to filter water from rivers, in order to provide the vulnerable access to clean water and sanitation. Another example could be in the Asia-Pacific region, exactly Myanmar, they are installing public handwashing stations by teaming up with community groups and small businesses and distributing education and communication materials. Works as such are being put into practice in all of the continents across the globe, in hopes of minimizing the spread rate of this pandemic.

There are several solutions to slums which governments and organizations can implement to reduce their irrational growth. Private and public institutions (schools, businesses, ministries, etc.) must implement decentralization methods, making these facilities as common in rural areas as they are in urban areas. Also, for institutions to employ locals before foreigners, as this will decrease the unemployment rate and will subsequently boost the economy. With the decrease of informal settlements, crises such as the one that we are going through at the moment will not be as worrisome. It all goes back to our individual jobs: the whole world is currently under lockdown, and the least we can do is work together (but independently) in order to flatten the curve by doing our separate parts. Stay at home for as much as you can, and if you were to leave, make sure to keep a distance at all times. Remain clean, always wash your hands, avoid contact with your face, and cover any cough or sneeze.  Most importantly if you feel sick, call ahead. As the human race, we’re all in this together.