It is interesting that our global confinement due to Covid-19 reminds the Queen of England of World War II, as it reminds me in a similar way of our civil war in Lebanon which started in April 1975.

Turning to April 1976. Schools and universities had been closed in Beirut since the beginning of the school year because of the fights and we had to spend winter for the first time in our little house in Baabdat, where we would usually spend our summers. Many other people spent that winter in the mountain to flee the war going on in Beirut and a friend of mine even came to Brummana High School in order not to miss out on an entire school year. During that winter we had a cyclone that uprooted many very old pine trees in our garden and the neighborhood. The people of the village, even the older ones, had never seen anything quite like this in their lives and said it was ‘God’s anger’ because we were at war in our own country.

So here I am, exactly 44 years later in this little house in Baabdat, and again for a very special winter. Remarkably similar to 1976, this winter also brought a very strong storm, and very old pine trees were uprooted again, and the airport is also closed right now, reminding of that time also… Back then, we had to leave one week before Easter under dramatic conditions with a cargo transporting apples, taking with us only what we could not leave behind us. We were lucky enough to reach the harbour of Jounieh and I will never forget the agitated crowd that was waiting there for the next cargo boat. It reminded me of the crowd in the Prophet of Gibran waiting for a ship…

I left on my birthday, the 17th of September 1976, with my father to Paris. It was the first time in my life that I took an airplane. I spent the school year at the American College in Paris, first waiting for my acceptance at McGill University in Montreal, but then, as it arrived, I decided to go back home (to my roots) to finish my B.Sc. at AUB and then also obtain my Masters from there. This is when and where I met Martin Giessen, a German Professor at AUB, who convinced me and helped me to go to Germany for my Ph.D. in Chemistry. 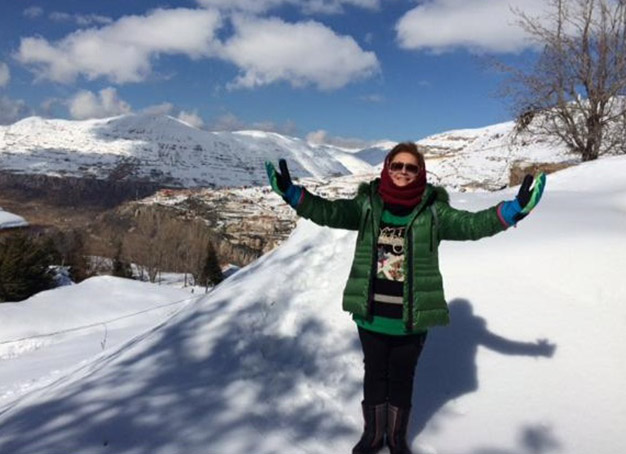 Finally, last summer (2019) I came back to Lebanon and joined Brummana High School. When people ask me why I came back to Lebanon, I have to think of a young man, a friend of my daughter’s, who comes from Spain. He told me last summer at a garden party in Berlin: “I am going back to Spain.” I said “Why?” and he said, “I love Berlin but I am not at home in Berlin. I need the smells and the sounds that make me feel at home, do you understand?” After a short period of silence, he asked, “What are the smells and the sounds that make you feel at home?” I said, “Yes. I know exactly what you mean. For me it is the smell of pine trees and the song of the cicadas in the summer time.”

The recent ceremony at Brummana High School celebrating the age of the oldest tree in the region was for me a major highlight when put in this context. Indeed, the school’s ‘Mother Tree’ was cored in December and its age is estimated at between 240-250 years, which is really quite remarkable.

I have friends who used to ask me sometimes for fun, “What are you doing here? You are the only tourist in Lebanon in these bad days (of economic and political crisis, on top of the Coronavirus pandemic).” I would laugh and answer, “I am not a tourist here; I need to water the roots.”

So to come back to our situation here and now. My perception of our confinement in this spring of 2020 due to Covid-19 – compared to the year 1976 – is a perception of peace and retreat despite another kind of dramatic situation, this time for human beings worldwide. It is, of course, as a perception not only very subjective, but also a snapshot as it applies to my situation in this moment in time and I am aware of the fact that many people in Lebanon right under the current circumstances right now feel much more insecure and desperate than even during the war… Since the Phoenicians, the Lebanese have been a people of traders. They need to go out and sell in order to live. So this situation of social distancing and confinement is difficult to bear. We learnt already at school that Lebanon lives mainly from banking and tourism, but also from trade and now that the supporting pillars are ‘wiggling’ to say the least, I can understand the deep concerns of the population perfectly well. 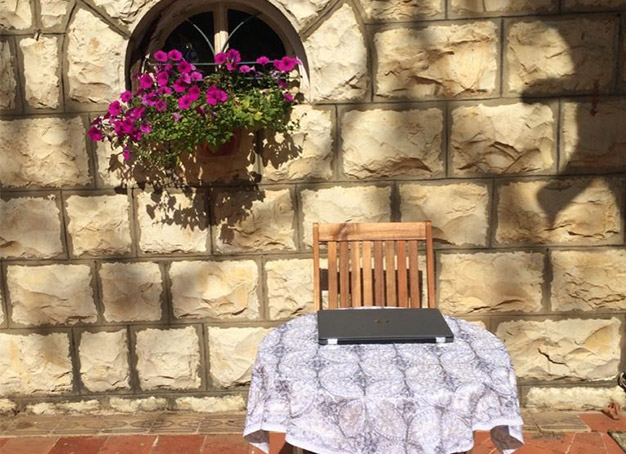 As I sit here today, working online from home, a pregnant wild cat is around and colonies of flying ants had even filled the terrace yesterday, while I was busy trying my new laptop. As we are now teaching online at BHS, I had to deal with the limitations of my iPad in the first few days and then decided that, if I wanted to survive, I had to buy a new laptop, and no matter what… Online classes, even though not a substitute for face-to-face classes, are a great experience as well as a chance of personal and professional development for everybody. My students have further enhanced their listening skills in the virtual classroom environment. They have also time to think before they talk and cannot be distracted by another in the class like they might have been in a ‘regular’ classroom. We are all now getting familiar with TEAMS (the school uses this Microsoft platform along with Moodle to administer distance learning) and extending and/or practicing our IT skills…

Returning to my laptop, as I did not immediately find a good option in Brummana, I looked instead online… and found one! The deal was made per WhatsApp and the laptop was delivered one hour later against a cash payment. It is amazing how services work in Lebanon; we do not have Amazon but we do have highly service-oriented people.

I am grateful to be back home under my pine trees and hope that this confinement will be a chance for people worldwide to rethink their lives. But, one thing is for sure: from now on I have a good friend, my new laptop.

“This pandemic is not a war… it is an evaluation of our humanity. It triggers the worst and the best in the human being. Let us show the best in us.”