The following pictures below are of the unique International Day of October 27th, 2017 held at Brummana High School (BHS). As the saying goes, pictures really do tell a thousand words, and these word are all about peace! This focus is very much aligned with BHS being a Quaker school, with clear and specific values instilled in all students, and members of the community, one of which being peace and always striving for peaceful resolutions. 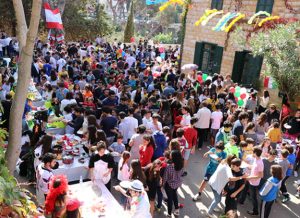 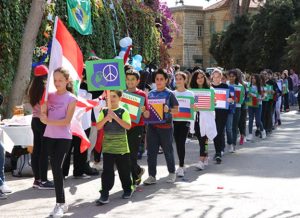 Please allow me to tell you about this great day in the school’s history and other peace actions that have taken place around the school.

Prior to that day, I had given a speech in the school’s general assembly to students and staff about an experience I had been fortunate enough to have in Japan and the knowledge I gained in terms of nuclear weapons vs peace work. My talk focused not just on the importance of assuming responsibilities in a world at risk of nuclear war but to get involved in bridging the gap between people and building peace. As a result, many students, with the collaboration of the Art Department led by Mrs. Maya Bechara (Art HOD), folded paper cranes (Japanese symbol of peace) that were displayed in the International Day of 2017 as can be seen in the photos. 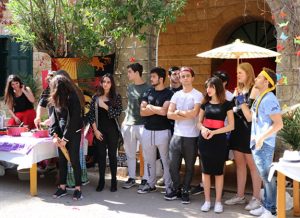 On that International Day, I spoke on the loudspeaker to the gathered crowd of hundreds of people about the story of the Japanese girl, Sadako Sasaki, who was encouraged by her friends to fold 1,000 paper cranes to have her wish of recovery come true, as she suffered from leukemia after the atomic bomb was dropped in Hiroshima. Unfortunately, the girl died after her partial achievement leaving behind a strong symbol of hope and peace. The aim of the story was to explain the symbol of paper cranes that were decorating the lovely trees on campus (mostly old pine trees, with some over 200 years old!) and to incite the community to support each other and instill hope! 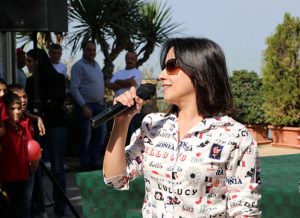 On that International Day too, the school invited, the orphans of Dar Al Amal, a locally based NGO orphanage (with the children seen in red shirts in the photos). That was a unique initiative as usually International Day is made to gather students, staff and parents only. Indeed, the whole day in 2017 was very special as the whole community shared a peaceful atmosphere full of diverse cultural music and dance with these young children who really needed hope and peace in their lives! 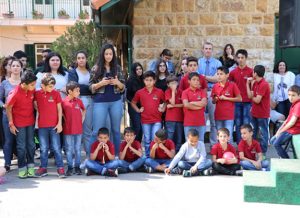 International Day at Brummana High School is really something very special! Students in the Upper School get to choose a country for International Day each year and they visit the official Embassy in Lebanon for that country. They then display delicious traditional food and various costumes from that country, and set up their kiosks. For example, you can see the Japanese stand of food where students and myself are pictured. 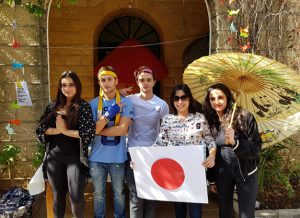 The orphans enjoyed their time beyond description but it’s also the Upper School students who enjoyed sharing food, and had a very fun time lifting those kids on their shoulders! Special boxes of food and clothes were sent to the Dar Al Amal orphanage afterwards too. 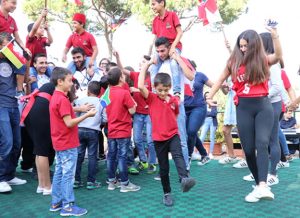 It is important to mention that 2017 was the first (and only) time that the peace sign was displayed in the flags parade, a parade that preceded the very popular costumes parade! 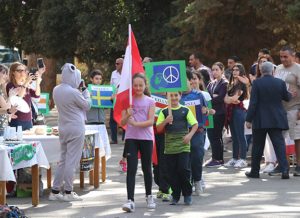 I’d like to mention that, along with my efforts, IB English Teacher Ms. Lisette El Hajj (English HOD) implemented peace discussions in her Literature class. Some of the questions that were included in these lessons were:

There was also a project in coordination with BHS STEM teacher Ms. Nado Chelala called the ‘gun violence’ project. Students Malek Hamzeh and Fadlo Abi Fadel worked on barcoding bullets and tying the barcode to the identity card, so each bullet shot could be easily tied to its owner. They designed 3D bullets and 3D printed them with bar codes in Mrs. Chelala’s class, as can be seen in the photo. 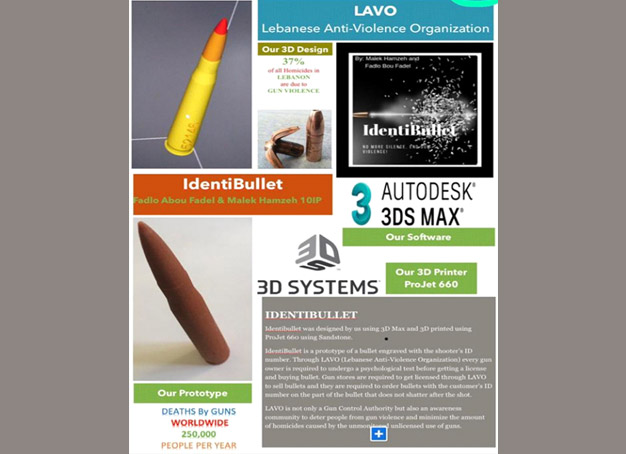 This year 2019-2020, Ms. Zeina Misk who is the Head of the Social Studies Department and is a certified professional mediator, has offered this year a course for Grade 12 students in the International Program, entitled “Conflict Resolution and Peace Studies”.  This course aims at accepting controversy and conflict, and the fear associated with the two, as inevitable aspects of human life, and at helping students develop critical and creative ways of thinking while engaging in problem-solving and conflict resolution. The course focused primarily on how culture, traditions, religion, politics, law and other factors influence community conflict and conflict resolution. It also enabled students to identify broadly the sources of conflict and ways that humans address conflicts at different levels. The course also trained students to demonstrate positive, non-violent skills of communication in simulated conflict situations.

In addition, there were other peace related projects across disciplines and across the community e.g. food donations, MUN debated, comparative study of war enemies’ perspectives in history…

In April 2018, I gave a workshop about peace education to a group of teachers during our BHS-hosted spring workshops, a national event open to all school teachers in the country. It was successful and very enlightening. Teachers tested their knowledge on nuclear weapons and took part in activities related to promoting peace per subject! 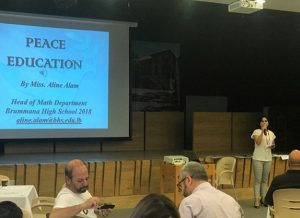 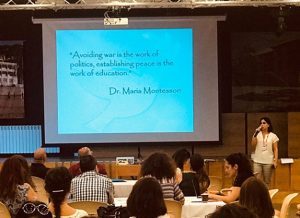 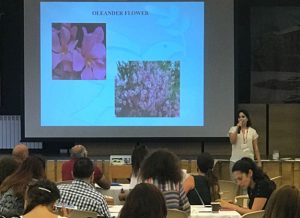 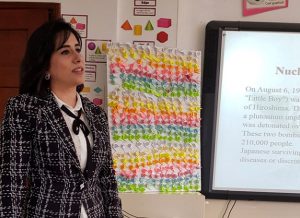 At the school, we also have a mindfulness club which I initiated a few years ago. Mindfulness plays an efficient role in controlling behaviours and emotions, and in changing reactions to responses by anchoring thoughts/emotions in the moment in a non-judgemental way, promoting inner peace and calmness (mindful eating photos with students Romy Samaha and Christina Boustany during the Mindfulness club) 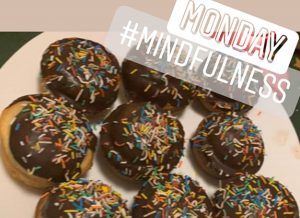 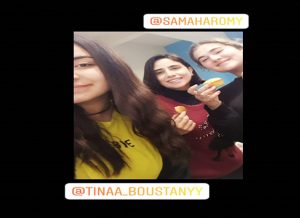 This really does all go to show you how important the concept of peace and the value of peaceful resolution is to me and indeed the whole school community.

I hope that I can continue to inspire my community for more solidarity and peace related projects to build a better future for our students, our community and our country!

What is your worldview and stance on peace?

I was very interested in your article about Peace studies in BHS.

I wonder if you ever heard that in 1962, during the time my husband was Principal, the school hosted a conference  to form the ‘World Peace Brigade’. We had pacifists attending from all over the world: India, Europe, USA. Well known peace activists like Bayard Rustin, Michael Scott, and Abbé Pierre attended. It was a strange event in that it was the weekend that the PPS attempted a coup d’etat, and we all stood watching as the Lebanese forces shelled the village in the mountains where their headquarters were. No one really knew how to react.

I don’t know weather I have met you during my annual visits to the school. After nearly thirty years of being involved with the school, (actually 60 years!) I am no longer a Trustee of Quiet, and many of my Lebanese friends are disappearing. I am myself 93 years old and don’t enjoy travelling alone so much. But my interest and love of the school does not diminish.

Keep up your good work.