I spent my school life in an elite Christian French-Lebanese school in Beirut which prepared me for my Lebanese and French Baccalaureates. Before leaving school we used to collect autographs from our classmates and teachers in a “Friendship Book” and I never forgot what one of my teachers wrote to me on that last day of school: “I do not have any doubt about your success in the baccalaureate examinations. I now wish you the best to succeed in the examinations of Life,” not knowing that less than one year later the civil war would start in Lebanon putting everybody’s resilience to the test. This was – so to speak – the first examination of Life I had to encounter.

Then suddenly came the war and the miracle of Lebanon vanished rather quickly. Many of my fellow students at AUB left Lebanon for outstanding universities including Stanford, Berkeley, MIT and McGill in North America, to name just a few. Young people emigrated. I spent one year in the mountain where I participated with a group of young people in teaching a few classes for the students who were stuck there and could not go back to school in Beirut. It was a spontaneous idea: A teacher I knew asked me if I was interested and of course I was. So he rented an old house and we organised a little private school where we taught the classes we felt we were expert at like Maths, Chemistry, English and so on in my case. It was my first teaching experience in life and for which I had rehearsed for many years on the balcony of our flat in Beirut with my twenty round dolls and black board on the wall. We had a year in the mountains, in the house my father had built in the middle of a forest of pine trees (in Baabdat) and which looked exactly like the houses I used to draw as a child. Those houses too had half-moon windows, doors with a round-headed arch, discrete natural stones, a roof made of red tiles and most important of all a tree in front of the house. After this year came to an end, I left for the American College in Paris.

The American College in Paris which was advertised with the words “Paris is your campus” was located in one of the more charming districts of Paris and turned out to be indeed a unique experience. International and relaxed, with Paris as Campus. However, it was an Art College which had a restricted choice of Science courses at that time. I managed to take my Organic Chemistry there and some electives. The American College has since developed and grown to become the American University in Paris.

At that time, I had thought of emigrating too, perhaps to North America, but then decided at the end of the year to go back home to finish my Bachelor of Science at AUB as well as my Masters too. Those years were not completely peaceful as the civil strife in Lebanon was in a kind of on/off state and I remember working on my Master Thesis with other colleagues in the Chemistry Department until the evening and under more or less the conditions of war. AUB somehow remained, during all the years of the civil war in Lebanon, an oasis in a desert of fights and bombardments. In spite of everything we never gave up our ambitions, our spirit and could celebrate our B.Sc. and M.Sc. commencements with hat and gown on the beautiful “Green Field” with palm trees located on the sea shore of the world-renowned university campus located in Ras Beirut.

Due to the war, the Ph.D. programs in Chemistry were cancelled at AUB and I decided therefore to do my Ph.D. abroad and chose Germany as the location. 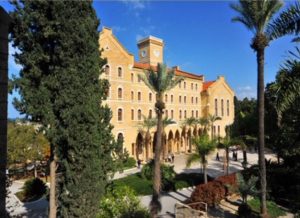 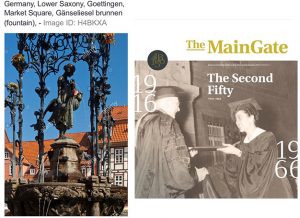 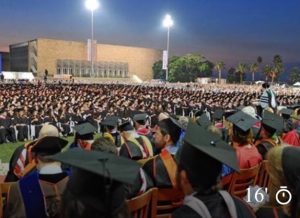 I left on the first of December 1981 for Germany. My trip to this new country for me, and one with a completely different culture and a language which was not commonly spoken in Lebanon, felt at first like the journey of an astronaut heading towards and landing on a new planet… After six months spent at a Goethe Institute in a picturesque village of South Germany (which at that time of the year covered with snow), I entered during the summer time to the prestigious Georg-August-University of Goettingen, where I was at that time the only woman in a research team with 20 male colleagues. My “Doctor Father” as they termed it in Germany, Professor Herbert W. Roesky, was a rising sun in the world of Inorganic Chemistry and my lab colleague Manfred, working just next to me, had very recently discovered one of the conformations of the cyclic octatomic molecular structure of the element Sulfur with a molecular formula S8. The atmosphere was competitive and those were challenging times; I was for everybody there at that time a kind of extraterrestrial…

My British professor of Chemistry in Paris had once told me: “If you decide one day to go to Germany, then to Goettingen.” Indeed, more than 40 names of Nobel Prize laureates are associated with this university and 14 of them were given this prize explicitly for their work there, among them: Max Born, James Franck, Werner Heisenberg, Johannes Stark (Physics), Adolf Butenandt, Peter Debye, Manfred Eigen, Stefan Hell, Walther H. Nernst, Otto Wallach, A.O.R. Windaus and Richard Zsigmondy (Chemistry).

And, perhaps the most interesting part of all is that, I met my future husband who was at that time a physician working in the Max Planck Institute next to my Chemistry Department… He was in the team of Professor Manfred Eigen who won the 1967 Nobel Prize in Chemistry for his work on measuring fast chemical reactions. I thought so this is how kinetics works… At that time, I was in my post-doc research studies and in the innovative team of the British Professor George M. Sheldrick working on X-ray crystal analysis of molecules to determine their structure.

It is a very oriental thought to think that we cannot escape our fate or destiny, and mine was to spend 38 years of my life in Germany. A long journey that took me from the picturesque village of Blaubeuren in South Germany to the university town and campus of Goettingen, where it is an essential part of graduation celebrations, for every student who finishes a doctorate, to climb the fountain and kiss the statue of the goose girl (“Gaenseliesel”) which was erected in 1901 in front of the medieval town hall. And they did this even in the very midst of winter, as it was in my case…

Goettingen was also known for the Christmas performance in Chemistry which was given annually during the month of December by my professor, Herbert W. Roesky, who was famous for it. The big lecture hall was always very crowded. Prof. Roesky wrote several bestsellers about spectacular experiments in Chemistry and told me later, after I started teaching: “You always want to focus on the highlights.” So I also introduced these Christmas performances in some of the schools where I taught and they were always a big success and a big fascination. My favorite inspired quote was:

“The Elements, who does not know,

Some other highlights in that period of my life were the Lindau Nobel Laureate Meetings, where university students come together with Nobel Laureates in the town of Lindau in South Germany at Lake Constance. The meetings used to take place yearly, alternating between Chemistry, Physics and Medicine, in the form of an international Science forum with lectures and workshops. The idea is: culture, inspiration and connection among different generations, cultures and disciplines. On the last day everybody was invited on the ship of Gustaf and Bettina Bernadotte, the count and countess of Wisborg to visit their island Mainau in the Lake Constance, which they transformed into a flower paradise and which attracts more than a million tourists every year.

Another highlight was my lecture about the reactions of hexafluoroacetone at the International Symposium for Fluorine Chemistry in the summer of 1986 in East-Berlin. I completed this as I was writing my Ph.D. thesis. My professor was invited but he decided instead to send me to represent the team of Goettingen and present its research results. My short lecture (15 minutes total) triggered the flashes of many journalists and incited several people from the industry to ask questions. I even got a job offer in a research team on Fluorine Chemistry in Idaho.

This was also the time where I got a job offer in West-Berlin and also a professor from AUB asked me to come back to the department of Chemistry, but I had other plans at that time…

More highlights were to come later. Those were Professor Manfred Eigen’s “Ski Seminars” in Klosters, Switzerland, which used to take place yearly in the second half of January. Nobel Laureates from all over the world would meet there for two weeks to ski during the mornings and then gather in the afternoon for seminars, with discussions then starting in the evening and going on late into the night.

These highlights enabled me to meet inspiring role models and fascinating personalities. A Nobel Laureate once told me: “Life treats us all the same, it all depends on how we deal with it.” But Professor William Lipscomb impressed me the most in Lindau with his kindness and humbleness. He was awarded the 1976 Nobel Prize in Chemistry for his studies on the structure of boranes (compounds of the element Boron with hydrogen) illuminating problems of chemical bonding. He has also done eminent work in other fields of Chemistry and his lecture in Lindau was about his notable findings in studies of the structure and mechanisms of enzymes. As he was also using X-rays for his findings he even invited me to join his research team at Harvard University. 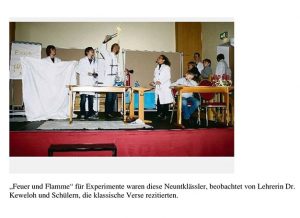 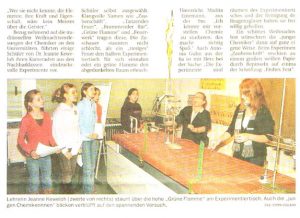 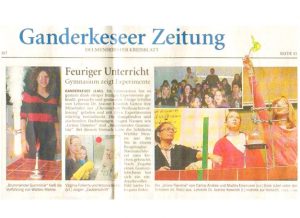 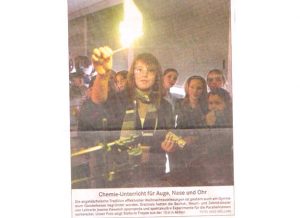 Every train passes only once in a lifetime and you have to be ready for it. This would have certainly been the train of my dreams, but apparently I was not ready for USA at that time. I married a German physician who became a nuclear medical doctor and stayed in Germany. Since 2003, I have been teaching Science in International and German schools in Bremen and Lower Saxony and in 2014 I moved from Bremen to Berlin where I continued my teaching until the summer of 2019, which was when I joined the British School of Lebanon, Brummana High School. My daughter still lives in Berlin and is doing her Masters there in Cognitive Neuroscience. I look forward to discovering where all of our graduates will take themselves off to either in Lebanon or right around the world, to progress their studies at universities, and build successful and meaningful lives for themselves.

Finally, science has always fascinated me. Like on July 20, 1969, as Neil Armstrong put his left foot on the lunar surface and famously declared: “That’s one small step for (a) man, one giant leap for mankind,” it feels to me surreal that, even in Corona times, NASA and SpaceX are proceeding with their historic crewed flight with Crew Dragon. This flight is now scheduled for May 30th after poor weather meant there could be no take off on the 27th. The programme is aiming to launch its very first astronauts into space. I hope many of you will find the opportunity to watch it!