Old Scholar Robert Bruce Laycock who attended BHS for three years in 1967, 1968, and 1969 while his father worked in KSA, recently contacted the school reminiscing about his days at BHS and congratulating the school on the launch of its Lebanese stamp! He considers those years spent in Brummana among the greatest times of his life and fondly remembers walking in the surrounding woods where he passed by houses whose owners always invited him to eat, and he says: “I really haven’t come across people like that anywhere else.” He also remembers returning from football games while chanting “BHS BHS” all the way back towards school no matter what the result of the game was. 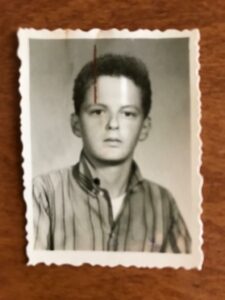 Among his good memories were attending school with the Libyan Royal El Senussi family, one of whom was very talented at playing football, and he recounted how they would often play on the old basketball court and how he always played as goalie. He also told of another Royal family, the Khalifa’s of Bahrain, who attended BHS at the time as well. He remembers how together they used to buy from the nearby Scandar’s and write down their names in a little notebook to pay for their purchases later. Also, he told of a third family who attended school with him, the Seikalys, Joseph Seikaly and his brother Roni, the latter of whom went on to play centre for the Miami Heat .

The school was thrilled to hear about such good memories and the impact it left in the life of an old scholar. We are always happy to hear back from our past students and learn about how they are getting on with their lives. If you are an old scholar or a previous member of staff and would like to get in touch to share your memories and updates, please contact the Marketing department on marketing@bhs.edu.lb.