I attended the Intermediate Section Founder’s Day assembly which I greatly enjoyed. It featured speeches in Arabic, English and French, some Drama, singing by our small girls’ choir and presentations associated with  our Founder.  I started the event by talking about the nature of foundations and the people, often unknown, who found something according to the need of any society at a given time, which takes imagination, a sense of invention, hard work and persistence.  I congratulated all the students who were involved in this excellent event and thanked the teachers Lisette El Hage, Eliane Bitar, and Maria El Ward from the English Department, Isabelle El Khoury and Hanna Dagher, from the Arabic Department, Jamie Tayyah, from the French Department, Rosy Hage, our choir mistress, as well as Carmen Hage, the librarian, for all the hard work they put in preparing the young people who were such outstanding ambassadors on the day for the school, and for preparing  the resources used during the presentations. I was, however, to some extent, disappointed by a few in the audience who chose not to listen and followed their own agendas and I shall be speaking to them at an assembly soon about the kind of decorum that is expected at an event such as this, from which everyone can benefit.  Through respect for others comes respect for oneself.  After the Intermediate assembly, we had the Secondary section assembly which followed a similar pattern and in both assemblies there was an excellent video presentation of Old Scholar Jian Barazi who spoke incredibly well about his school experience and who emphasized the importance of hard work and of valuing others. He also referred interestingly to his own founding of several businesses in the years since he left school and after his university experience at MIT.  I am indebted to Aline Alam who organised the assemblies which were an impressive tribute to our Founder, Theophilus Waldmeier.  Next year, the School’s 150th anniversary, we hope to build on what we have already done this year in order to remember the Founder of the school and the foundation of Brummana High School. 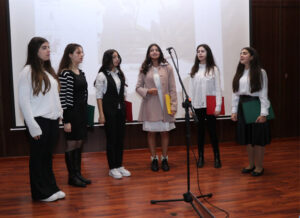 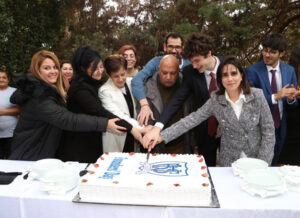 As the assemblies overran somewhat, I was unable to stay for the cake cutting afterwards and the associated celebrations of the foundation of the school and my place was taken by Georges Rizkallah, the Vice Principal. I am sure colleagues will have seen pictures, if they were not there themselves, of the celebration among staff and students.