Grade 10LP’s Karly H. is really quite an unbelieveable sports star! Not only did she feature over the Christmas holidays for the U18 Lebanese national football team, a team that won the West Asian girls championships, now she is the Lebanese women’s taekwondo champion in the weight category -62kg, after dominating the Senior Lebanese Black Belt Championship. One on its own would be a truly remarkable achievement. Now achieving both, frankly, we are all more than a little lost for words for you, Karly! Congratulations and mabrouk to you and thank you for the inspiration you are providing to so many of your peers at school too.

Karly had the following to say after her footballing exploits with the U18 national team:

Football is one of my favorite sports to watch and play. Recently I travelled with the Lebanese national team to participate in the second West Asian Football Federation (WAFF) under 18 girls championship, which was held in Bahrain. We played against Jordan UAE and Iraq in the group stage, Palestine in the semi-finals, and Bahrain in the finals. We remained unbeaten throughout the whole championship. I play as a Central-Defending Midfielder (CDM), and I like playing in this position since it is challenging.

The team was my second family, I am so thankful to have such great teammates. I love them all so much especially Lili Iskandar. Lili was my roommate, and the team captain. She is such an amazing friend and player; she got the trophy titled the Top Scorer of the tournament. Lili was such a great teammate, since she would motivate the team and I a lot during, before, and after our matches. And I am so glad she was my roommate. It was such a good experience for me, since I got to play and win with such a great team. Football is such a great sport, and I would advise everyone to give it a try. 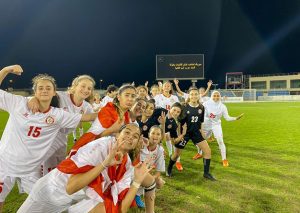 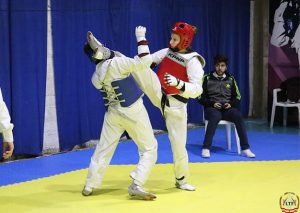 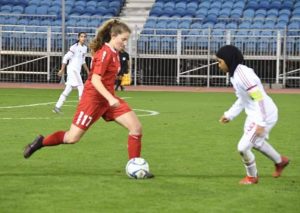