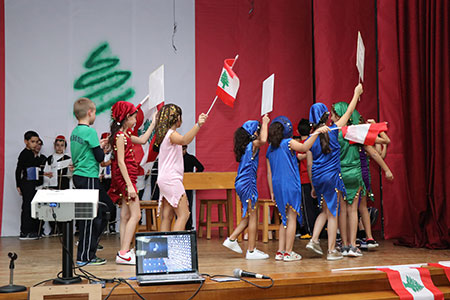 Independence Day was celebrated in the Secondary Section with two main activities. On 19 November, all Secondary 3 LP students participated in a qualifying writing activity as part of an inter-schools competition organized by Bank Audi to celebrate the 75th Independence Day. As a result of the first round, 3 students were selected: Michel Sadek, Youssef Al Sharif, and Andrea Atallah. These students will compete in the next round in February, with students from other schools. Congrats to all 3 students. On 29 November, a special assembly to celebrate Independence Day was held. The assembly featured Journalist and civic activist Ghassan Saud as guest speaker. Mr Saud held a very interactive talk with students, in which he explained how much change students can induce on a civic level if they have the will. Students were very enthusiastic and interacted positively with the guest, advancing many original ideas.

In the days leading to Independence Day Parade, Intermediate students were given a brief history of how Lebanon gained its independence. This was followed by a parade of students waving the Lebanese flag. They marched out the Elementary Gate onto the main road and back onto campus via the Main Gate. Students then lined up in silence for the Lebanese national anthem and a few words from Principal Dr El Khoury.