My Trip to Oman

I got a taxi to the airport and travelled to Oman via Doha; unfortunately my suitcase did not follow me all the way to Oman with the result that the following day, I had to address the GESS conference dressed in my previous days casual clothes’. Well at least it got me noticed, if nothing else!

In spite of this unfortunate set back, my trip to Oman went well. I was astonished by the number of people who attended this one day conference. For the opening panel of which I was a member, there were about 4 to 500 Omani’s present in the audience including the minister of Higher Education and a whole entourage of diplomats and senior civil servants. This was helpful in putting Brummana High School’s name on the Omani map and later I made the closing address to the conference on educational leadership.  I met quite a number of Lebanese who live in Oman and I made excellent contacts and connections with people who had flown into Oman for the conference from all over the Middle East.  It was also useful for me to make the connection between my talk on leadership with the current leadership of Oman which is led by the Sultan and his brothers all of whom were educated for some time at Brummana High School in the 1970’s. 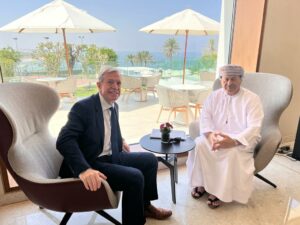 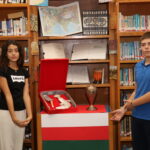 I had several meetings with senior diplomats close to the Omani Royal Family and also contacted the younger brother of the Sultan. I had several meetings  with a senior diplomat with whom I had lunch on the Friday, who is closely linked to the Omani Royal family and who is also an Old Scholar of Brummana High School. He is keen to come and visit the school and to see what can be done to help us either before the end of this calendar year or during the course of 2023, our 150th anniversary, which may prove to be an appropriate opportunity a visit by members of the Omani Royal Family who while I was in Oman expressed an interest in returning to Brummana.

I left Oman on Friday afternoon and got back to Brummana at midnight on Friday having had a successful trip and which promises well for the future.  While I was in Oman I was able to present the Sultan with a painting by Tom Young, the Lebanese/English painter entitled ‘The Cedars’ as a gift from Lebanon to Oman and also a framed photograph of the Omani corner in the Library which has been recently established.  These overtures are important in re-establishing links with a family who have not been back to the school for 50 years.  I was interested to note however, that they were well informed about events in Lebanon and the state of the school and had not forgotten the visit to Brummana by Asaad Bin Tarik, the Deputy Prime minister, who had visited in 2019 about a week after I had arrived. I remembered how he had enjoyed his visit. I intend to build on the connection and meetings I had in Oman in order to strengthen our links with the Omani family who are interested in being closely connected with the school.