On Monday 12th of April during the Secondary Assembly, the students and staff were given a lovely and highly motivational speech from the principal, Mr. David Gray. This year truly has been trying for all. The uncertainty, the obstacles, and the isolation have been a universal struggle for staff and students alike. This struggle is often overwhelming but, as said by Mr. Gray, we are prevailing and pushing through. During the assembly, Mr. Gray told the story of Scotsman Alexander Selkirk, who found himself alone on a desert island with nothing but a dagger, a rifle, and some clothes, after being kicked off a ship. Selkirk, consequently, had to deal with the dangers and hurdles of living in isolation on the Juan Fernández Islands. Selkirk certainly did not anticipate his predicament and, similarly, neither did we. Selkirk, Mr. Gray said, had to adapt and learn, so that he could fend for himself. Fortunately, we, as well, have adapted and learned a great deal in our time in isolation. Moreover, a wonderful conclusion to Mr. Gray’s parallel was that Selkirk came out on top of his 5-year isolation, having not only survived but grown tremendously. Although it is still unclear what lies ahead of us, we shall surpass every hurdle one by one, each hurdle being accompanied by a little growth and a little wisdom. Our hard work and efforts are rewarded and just like Selkirk, we will endure and prevail. ​ 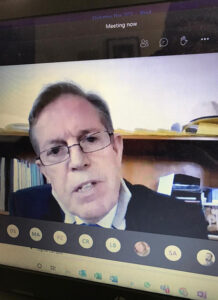