My name is Natalie A. and I’m the acting Student Council President at BHS. This is my 15th and final year at the school, which I consider my second home. Having been born and raised in Broummana, I have witnessed firsthand many of Lebanon’s lows over the past decade, and yet their impact pales in comparison to the total devastation of August 4th – a gross miscarriage of justice and a crime against humanity. On a day like any other, 2,750 tons of ammonium nitrate exploded in the Port of Beirut, yielding 200 casualties, thousands of injuries, over 300,000 displaced, and total devastation of the capital.

The blast shook the country and reverberated across the sea to Cyprus. Beirut, a beautiful and unique city, was in ruins, but the hearts of all 4.5 million people living in Lebanon as well as its diaspora of 12 million, were even more shattered. The youth, along with NGOs, were the primary responders who handled injuries, cleaned up the rubble, and offered free housing, medical services, food, clothes, sanitary products, and more… One might remark that the pandemic was not over despite the explosion, but the Lebanese people, be it financially or emotionally, simply could not afford to stay at home. Instead of studying for the SATs, applying to colleges, or thinking about the future, Lebanese teenagers were calling their friends and family to make sure they were alive. They were organizing food drives, picking up glass, carrying debris, and scrubbing the blood off of walls and floors in Beirut. “They have made our youth carry brooms instead of books”. A sad but accurate truth. 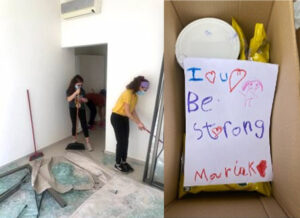 Unbelievably fortunate enough to live safely outside the radius of the blast, my friends and I went to volunteer in Gemmayze, the closest neighborhood to the port that had suffered the most damage, the day after the explosion. I cannot describe the sight in mere words, but I have attached photographs and videos of the debris and broken buildings. Not a single building was spared. Unable to understand the unfathomable transformation of Beirut and too hurt to process how people’s homes and Beirut’s infamous restaurants, shops, and clubs had been reduced to rubble, we got to work. My friends and I carried pieces of debris, swept floors, and picked up glass. I was personally in charge of a lady’s souvenir shop, and I cannot explain the pain of cleaning up the broken souvenirs – her entire source of income and livelihood. We will never forget the sound of clanging pieces of glass or the sight of blood being scrubbed off walls. Even more difficult to swallow was having to recognize the privilege we had of returning home once we had worked ourselves to exhaustion, while others were still searching for their children underneath the rubble. 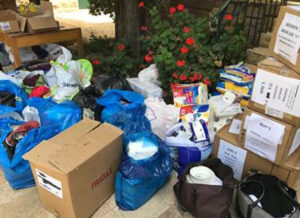 Having seen the enormous turnout for cleanup volunteers, my thoughts turned to those who survived the explosion, but not the devastating economic crisis. With 50% of the Lebanese population living under the poverty line, there were millions of people without food, shelter, clothes, and other basic necessities. My first instinct was to organize a food drive. I discussed this with then-President and my friend Rodolf, and we were granted permission to use the school campus for the drive. Working closely with some staff members and the remaining members of the Student Council Executive Committee, we were able to run the drive for two weeks and collect an extremely generous amount of food, clothes, sanitary products, furniture, and money. I was in awe at the generosity and kindness of the members of the school community, with students, parents, teachers, staff, members of the Parents’ and Old Scholars Associations, and even residents of the Metn region with no ties to BHS. The turnout was inspiring, and we were able to safely deliver the goods to various NGOs in Beirut including the Dafa Campaign, Feed the Need, and Beit El Baraka, and the cash donations to the Lebanese Red Cross. If there was any conciliation to the disaster that had occurred, it was that it brought the community together and the best of each individual.

For our generation, 2020 has been an unprecedentedly overwhelming year with its chaos, crises, confusion, and changes, but for the average Lebanese teenager it has been particularly difficult. We have all lost a piece of ourselves this past year, but still, we dream through the anger, the indignation, the loss, the PTSD, and the survivor’s guilt. Because for Lebanon, it has never been about the size of the country in the fight, it’s the size of the fight in the country, and no one has more strength, resilience, or spirit than the Lebanese people. Lebanon is 10,452 km2 of unwavering fight, of brotherhood, of solidarity, and of hope. Lebanon is 3000-year old cedars and red-tiled roofs, and it is also skyscrapers, nightclubs, and festivals. It is a mosque and church standing next to each other, and the ability to ski and snorkel on the same day. Lebanon is my friends’ jokes and family’s hugs, my Teta’s tabbouleh, and the extra third kiss on the cheek. It’s when I realized I didn’t want to have to leave for university. Lebanon is open doors and open hearts, a fire that never burns out, and a song that never fades. 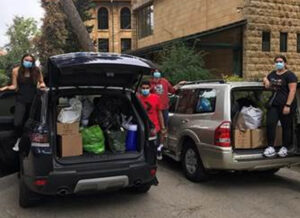 To non-Lebanese people, our experience shows the importance of unwavering resilience and brotherhood in the face of injustice, conflict, and corruption. Never before has the solidarity of the international community been more important, and its vitality will remain critical as we navigate more eminent threats: climate change, social equality, poverty… The fight for justice persists, and although the end goal is not yet in sight, it is only together, that we can begin to see it. It is therefore my final goal for my time at BHS to help instill a sense of service and generosity in my peers and the generations to come, and there would be no better example of the importance of international solidarity, than doing so in collaboration with students from Sidcot.