The Evolution of Bounded Communication: An Emotion-Glorifying Society

Nowadays, we tend to value communication more than anything else in the world. Considering we are going through a pandemic, now is the time where people need each other the most for stability, companionship, and support every now and then. Communication and language as a whole go way deeper than what we perceive, for at the end of the day it is one of the crucial means by which we get our ideas across, share information, develop social relations, and so on. As human beings, we are in fact entitled to the right of communication and using it to freely express ourselves, according to Article 19 of the Universal Declaration of Human rights at least. But to what extent is freedom of expression a “freedom”? Can it be abused or not used fully? Does it have its limitations set by social standards? Regardless of the cruciality of communication today it is extremely difficult to avoid controversy while using it, which eradicates distinct speech and makes it all the same format.

With time, the permitted lingo for groups and minorities is constantly being altered and adjusted, for a fairer and egalitarian way of communication. In the 70s, saying racial, homophobic, or xenophobic slurs would not be as major as it is today. In fact it was acceptable, since society still believed in the superiority of different classes and social groups at a larger scale than they do nowadays. By shedding light on such, we are able to have inclusion be deeply embedded in our values, morals, and most importantly, the way we treat one another. Although, it is bound for someone to fall outside the line; to be a “renegade” in a way or another. This is where Cancel Culture steps in to put renegades back in their place. Cancel Culture is, in a nutshell, ending support towards a specific person for doing wrong actions or saying socially unacceptable things. As a result, these people are “cancelled”. Several celebrities have been victims of this practice, the biggest of 2020 being Ellen DeGeneres, after claims about her racism and toxic work environment started surfacing on the Internet. 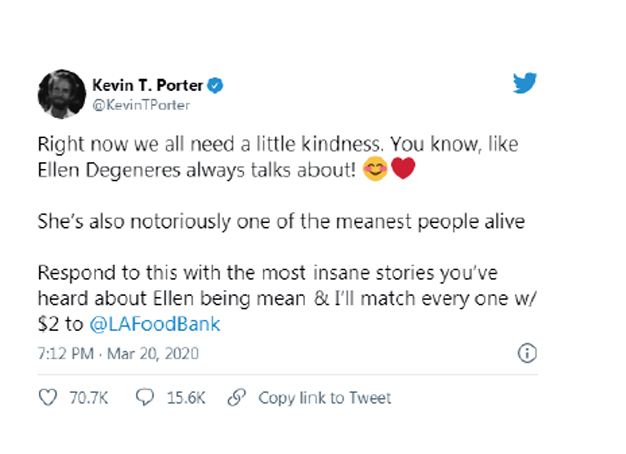 Although it is inarguably a very effective way of having wrongdoers get back on what we deem to be the “right track”, it is very abusive, threatening, and most importantly, has great potential of eradicating freedom of expression. In an interview with Glamour Magazine, Chrissy Teigen claims to be living in fear of Cancel Culture. Teigen, known for her bold statements, still revises and filters everything she does before having it out on the Internet. “It’s good to think about what you’re going to say as it’s going to live forever. It’s hard because now I do want to say certain things, but I have to think, ‘Am I prepared to deal with the backlash?’” People online today are just like Chrissy: mortified of saying the slightest things online because they do not want to be held accountable for something that they may not know is regarded as offensive, since social rules are changing on the daily.

We currently live in a society defined by sensitivity, rather than free expression using evidence and facts. Emotions and feelings are now seen as factors to take into consideration to deem the acceptability of a certain action. This causes high reluctance and restricts individuals from speaking their minds, and basing it on tangible areas of knowledge: natural sciences, history, etc. In a developing world with new identities appearing one after the other, it is highly important that they are protected. But, while prioritizing emotions and subjectivity over proof and objectivity, it gives the impression of overprotection which can lead to misconceptions,
generalizations, and complete loss of identity (also a form of expression). In 2015, the University of New Hampshire released a now deleted guide for students to use when communicating with one another. It consisted of a list of words that are frowned upon and are offensive, and alternatives for these words. In spite of the fact that the guide offers a handful of correct terminology which should be used, it goes overboard with a few others. According to UNH’s Bias-Free Language Guide, the word “Arab” is problematic; it is preferred to say “Northern African” or “Western Asian”. Objectively speaking, it is an accurate way of describing the people: based on their geographical location. But as a guide which is supposed to be unbiased, does it not wipe out the existence of the Arab ethnicity, subsequently resulting in
social conformity and stopping people from expressing what they identify as? Is it really a protection of identity, in that case? Shying away from ethnicities: in the same guide, 90-yearolds should not be referred to as “senior citizens” or “elders”, but “people of old age” instead. To us, as individuals who are brought up in institutions which value the rights to free expression and identification, it is quite ironic how a guide trying to preach principles such as diversity, inclusivity, and equity is actually eliminating them and replacing them with neutrality, compliance, and far-left wing terminologies.

By using our emotions and biases as criteria and as rulers of our communication, be it actions or speech or any other form, we will eventually all adopt a very bland, “socialist” way of interacting. Neutrality is not what the world needs right now, not when we are making progress as the human race and learning to appreciate, not appropriate, and take pride in the differences we have with our peers or other individuals. Freedom of expression is how one is able to put their identity out there, in the real world, for people to learn how to value. Restricting one of the easiest means of self expression only stands as an obstacle for any endeavor.