Today I travelled by uber to Abington Friends School in JenkinTown and met with Justin Solonynka the director of Choral music and the chair of the Arts Department. He gave me a tour of this delightful school and I was able to see a Quaker school in the Primary Section in action. I noted the way in which they have displayed Quaker Values around the classrooms which reflects exactly what we are doing at Brummana with Quaker Values at the moment.

I was also hugely impressed by the grounds of the school and strangely by the Quaker cemetery which lies between the Meeting House and the main school. It was a place of great serenity, unenclosed and emphasizing the cycle of life.

I then had a meeting with Upper School Students, representing the Quaker action committee, student leadership and Middle Eastern and North African affinity groups. We talked about Lebanon, about Brummana High School, about our needs and about the possibility of connections.

I then went to a lunch in the school hosted by Abington Friends  school at which I made a presentation to members of the Quaker meeting of Abington,  to members of the teaching Staff and to other interested parties who had decided to come along. This was a very good meeting and one in which there was a lot of interest in Brummana in its plight and  in providing support. I am hopeful that this meeting will have generated a good deal of help for the school. 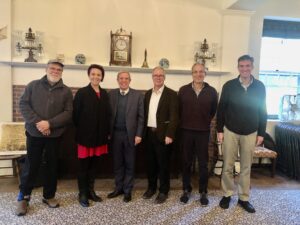 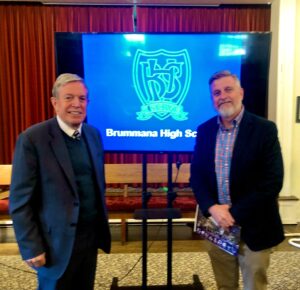 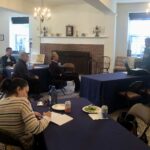 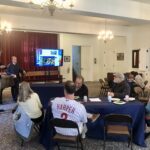 In the afternoon I got an Uber back to the house at which I was staying and then had an online meeting with a number of people which took the form of a rehearsal for the evening meeting which was also to take place online and duly  it did take place at 7:00pm. This was a meeting of a variety of Quaker groups: the Middle East collaborative, the Central Philadelphia monthly meeting and a range of other Lebanese supporters who now live in America, and Quakers from all around the United States. There were in the event about 50 attendees in all and my presentation was very well received and followed by an extensive question and answer session.  Again I was pleased at the number of people who wanted  to support the school and who will do so. As with all fundraising activities the secret will be to follow up on each of these sessions and ensure that they are not forgotten and that we are successful in attracting the funds that we need.  Fortunately we have been able to, on the one hand , provide information about the school, about how to make pledges and donations and on the other hand have taken attendance lists at all the presentations I have given.

Tomorrow it will be on to New York by train and a series of meeting with individuals and with Quaker groups there. I shall be staying in a hotel in Brooklyn having been previously  offered hospitality by a prominent Quaker in the Upper west side which had to be withdrawn as the family has now contracted COVID .

My trip is proving  so far to be successful. It  is exhausting and there are many days of this kind of activity ahead, but it is very worthwhile, although I miss Brummana and look forward to getting back soon.