The morning of February 28th, 2020, the IB1 Chemistry class applied theory to real-life situations, by modeling a variety of molecules using a kit which allowed them to assemble and better visualize ‘ball-and-stick’ diagrams in chemistry. The VSEPR (Valence Shell Electron Pair Repulsion) theory was put to practice when the students assembled single, double and triple bonds with several atoms to create molecules which they studied in class. Among the modeled molecules and ions were the ethylenediaminetetraacetate (EDTA) ion, glucose, alanine, water, sodium tetrafluoride, dichloromethane, and many more. The class appealed to kinesthetic learning by taking on a hands-on approach, as opposed to the traditional method of lecturing and note-taking. The class atmosphere was relaxed and interactive and allowed for the discovery of the potential applications of VSEPR theory, and for a more holistic understanding of its overall concept. Written by Adriana Ghoraieb, IB1 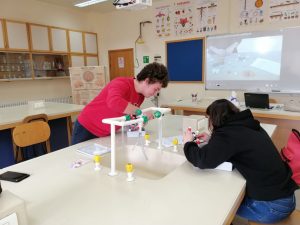 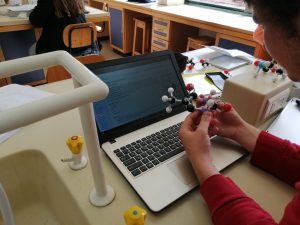 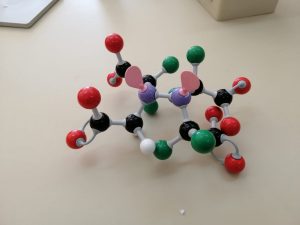